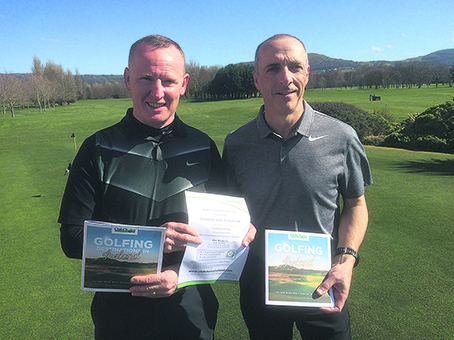 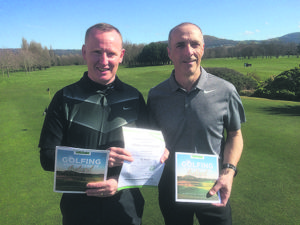 RHUDDLAN members Andy Mendel and Paul Bennett bagged themselves a golf break to Ireland after they won last month’s Golfers Local Charity Golf Day at Prestatyn, sponsored by Club Choice Ireland. The event, which was extended from its original field of 72 to 84 players, and raised £1,180 for Children with Cancer UK on the day too.

The duo, who play off five and 15 respectively, fired 45 Stableford points to win on a countback from brothers Steve and Dave Richards.

Golfers Local’s Paul Chapple organised the event which took his fundraising total past the £2,000 target he had pledged the Children with Cancer UK charity for a place in this month’s London Marathon.

He said: “Congratulations to all our prize winners, including raffle winners.

“A massive thank you to everyone that took part and to our main sponsor Tiernan Byrne at Club Choice Ireland for putting up such a great first prize.”

The winning pair will head to Ireland for two night’s bed and breakfast at The Martello, in Bray near Dublin. They’ll play the fabulous Dun Laoghaire and Druids Heath courses while they’re there.

“Children with Cancer UK is such a deserving cause. For anyone to suffer with cancer is awful, but when it’s someone so young it somehow seems even worse.

“Going well past my target of £2,000 is going to give me even more motivation to complete the 26.2 miles in London, hopefully in less than four hours.”

We notice you are browsing from United States, would you like to view your local version of Club Choice?